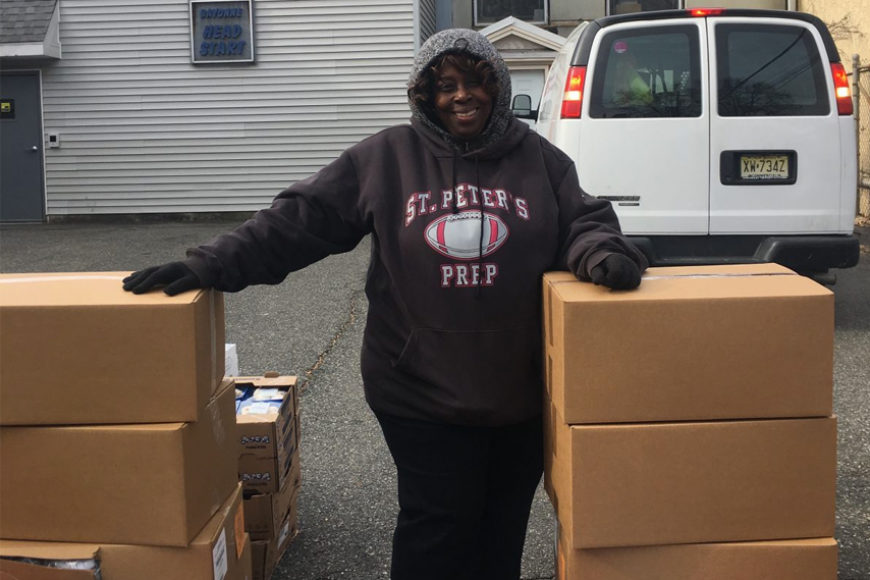 According to Feeding America’s latest Map the Meal Gap report, 1 out of every 10 New Jersey residents experienced some level of food insecurity in 2016. Among these 900K+ individuals (including 268K children), approximately 67% qualified for some type of government aid (such as SNAP or WIC) while the remaining 33% did not.

Stephanie Glover-Wilson didn’t need to see these statistics to understand the need she was seeing each day in under-served communities in and around Hudson County. Even those gainfully employed and/or receiving benefits find themselves perpetually on the edge of crisis, which makes consistently connecting the community to nutritious food a mission of vital importance.

“I think they need to change the gross income level, when some of the single mothers go on welfare or get food stamps. A nurse might gross a thousand dollars but by the time taxes, benefits, and other needs are addressed, she may only bring home $600 to pay rent, service, car insurance, etc.… so, I think something should change at the state level.

Will they do it? I don’t know.

Should they do it? They should have done it yesterday”

In 2016, Stephanie Glover-Wilson made that vital mission her own. By founding Hunger Free Bayonne, Stephanie has played a major role in creating that critical connection – receiving fresh produce and canned food from Table to Table, large companies, food drives and other sources and distributing by the pallet-load to churches, senior centers, the Boy Scouts of Bayonne and even neighbors looking out for neighbors – making a positive impact in communities in Bayonne, Jersey City and even as far away as Brooklyn.

Building up the organization over the past two years, Hunger Free Bayonne has substantially increased the size of its weekly operation, now accounting for a literal truckload of donations each week distributed from their current headquarters, the parking lot around the corner from the Bayonne Museum on 9th and Broadway.

“We first started getting eight pallets, Table to Table saw that I was giving them out so quickly, that now I get 16 pallets. If I had to put a number to it, I know we feed 2,000 people every Saturday”

Stephanie is no stranger to serving her community, having been introduced to activism by her mother at an early age. Another major influence was her godmother, Janet Haynes, the first African-American Hudson County Clerk and the original members of Saint Patrick’s Rosary Society, who taught her that doing something for her community was doing something for herself as well.

She recently celebrated her 50th birthday at St. Lucy’s Shelter, inviting her friends to “make a plate” and contribute to the distribution of 125 gift bags with toothpaste, mouthwash, sanitary napkins and razors. She has continued this tradition with her own three children, volunteering as a family with Let’s Celebrate prior to starting Hunger Free Bayonne. In fact, her youngest daughter – at only nine years old – has taken after her mom, starting her own organization to collect and distributing socks to those in need, having most recently collected and distributed 300 pairs for the First Children’s School in Fanwood, NJ.

While no one who has worked with her – or witnessed her in action – would deny that Glover-Wilson is a power-house activist – Stephanie’s own highest praise is saved for her team of volunteers, as well as those who have helped her get Hunger Free Bayonne moving in the right direction. Alongside the Bayonne Economic Opportunity Foundation (BEOF) , she credits her mother, husband, and Stacey Flanagan – Jersey City’s Health and Human Services Director – as a strong allies to the organization, before turning an appreciative gaze towards the dedicated team of 15-25 volunteers who show up – week in, week out, rain or shine – to help distribute food to the community.

“Volunteers always give me ideas, I am not a one-woman show – I don’t take all the credit. She’s a Jersey City cop, he works for the union, she’s a pharmacist, she’s a teacher. They come from all over Bayonne, Jersey City and New York to help out. This guy right here is one of my re-entry program guys. He had a risky past and he wanted to volunteer, he wanted to give back to the community and he’s been coming here, volunteering with us and now he brings his daughter and we try to help him out because it’s hard when you come home from jail and you don’t have people on your side but I wanted to let him know, he had a whole community that will help him go forward.”

Indeed, what is most striking about Hunger Free Bayonne is the unity and diversity of a volunteer team which represents a wide cross-section of ages, races, religions and backgrounds and whose whirlwind speed and efficiency sorting and loading food donations into the vehicles of distributors is as inspiring as it is dizzying. The energy of their affection for each other, and for the communities they serve is immediately obvious and infectious, breeding an atmosphere of controlled chaos, good-natured ribbing and most importantly productive work as bag after bag of food is packed, pallet after pallet organized and carload after carload packed off and sent on its merry way.

Stephanie accepts all types of volunteers, provided they arrive ready to work with a positive attitude (“friendly, patient and kind”) towards the public they serve. While loading the vehicles does require some strenuous labor, volunteers who are not able to exert themselves can also help packing and sorting smaller bags, managing the line and interacting with the recipients – often making them feel comfortable enough to identify special needs from those who may be too shy to speak up for themselves. As referenced above, Hunger Free Bayonne is open to accepting formerly incarcerated volunteers from re-entry programs – however this may involve additional screening.

How to Get Started:

“When I started the program two years ago, a lot of the people told me – it’s not going to work because Bayonne doesn’t have a problem. I said, give me six weeks I’m going to show you and it’s been two years. The powers-that-be apologized because my town does have a need”

It is not a rare thing to witness the beginning and the end of the process of distributing food to under-served communities. Contributing to a collection, or helping to serve at a kitchen or shelter are both important ways to volunteer in the service of the need for nutrition. Less apparent, but no less important is the work being performed by organizations like Hunger Free Bayonne. Connecting the resources to the community via bulk distribution requires a lot of hustle, a bit of ingenuity and a good deal of persistence – all characteristics embodied by Stephanie Glover-Wilson and her team of volunteers.

If you have identified an unmet need in your own community, Stephanie strongly recommends finding a local 501(c) non-profit organization to act as a sponsor prior to reaching out to companies and organizations that may be able to provide food donations for distribution.

How to Support Hunger Free Bayonne:

Force the Issue NJ is dedicated to creating Platforms for Progress for the community of activists, organizers and volunteers in New Jersey. Among these platforms is the creation of media that privileges direct civic action in the service of the community. In that spirit, we are pleased to present the first installment of our “Working for Change” profiles, featuring one of Hudson County’s most prolific and energetic activists. This interview was conducted on April 7th, 2018